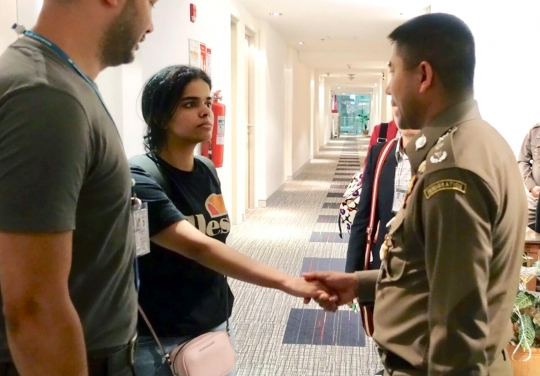 Introduction by Croakey: Australian media outlets were reporting on Thursday that the Australian government is conducting health, security and other background checks on Saudi teenager Rahaf Mohammed al-Qunun ahead of her possible resettlement in Australia as a refugee.

In the post below, originally published at The Conversation, Tamara Wood, Centre Affiliate at the Andrew and Renata Kaldor Centre for International Refugee Law, UNSW, examines the issues involved in winning refugee status for women seeking asylum for family violence.

Saudi teenager Rahaf Mohammed al-Qunun’s story has travelled around the world this week, highlighting Saudi Arabia’s repressive treatment of women and that not only those who seek asylum by sea face perilous journeys to safety.

For now, al-Qunun remains in Thailand, and it’s been reported the UN’s refugee agency (UNHCR) has deemed her to be a refugee. Australia has said it will consider granting her asylum.

Reports say al-Qunun fears, if she is returned to Saudi Arabia, she will be abused and killed by her family for renouncing Islam and asserting her independence. Sadly, al-Qunun’s fear of being harmed by those closest to her is not unique. 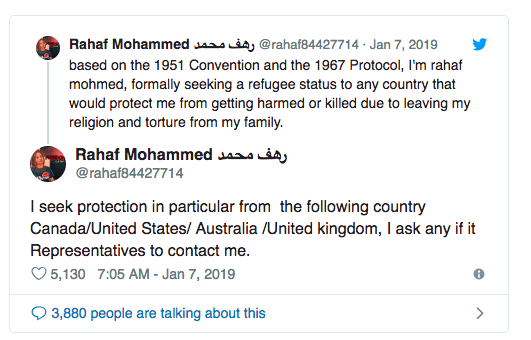 Worldwide, an estimated 35% of women have experienced family or domestic violence. In some countries, the figure is closer to 70%. Not all those at risk will be entitled to international refugee protection, however. Only those who meet the definition of a “refugee” can make a valid claim for asylum.

Women fleeing family and domestic violence must deal with a unique range of legal and practical hurdles before the threat of being returned will truly have passed.

The international refugee convention of 1951 defines a “refugee” as a person outside their own country who fears persecution because of their race, nationality, membership of a particular social group or political opinion.

Read more: Explainer: how Australia decides who is a genuine refugee

This legal definition was devised in Europe in the aftermath of the second world war, primarily with the political refugee in mind. Although the convention isn’t limited to those fleeing political persecution, women fleeing gender-based violence must overcome a number of hurdles to show they meet the definition’s criteria.

The most fundamental requirement for refugee protection is that the applicant be outside her country of origin. This alone precludes most women from accessing international protection. The cost of travel and the danger it entails – women and girls face heightened risks of sexual violence, trafficking and exploitation during their journeys – make seeking asylum a dangerous endeavour.

For women living under repressive regimes such as in Saudi Arabia, where permission to travel is required from a male guardian, leaving the country may be impossible. For those who do leave, trying to prove they are at risk of persecution poses further challenges.

Beyond obvious physical signs of mistreatment, obtaining evidence of domestic violence is notoriously difficult. In most refugee cases, the primary means of establishing the applicant’s claim to asylum is her testimony. Lasting effects of trauma, potentially significant cultural and language barriers, and being surrounded by often male interpreters, decision-makers and legal representatives, can make the burden of proof for such women overwhelming.

Moreover, the refugee definition itself was not designed with the experiences of women in mind. In cases like al-Qunun’s, failure to conform to religious expectations will likely play a role. But the tendency of refugee status decision-makers has been to see violence by family members as a private matter, and not attributable to one of the five grounds of persecution: race, religion, nationality, membership of a particular social group and political opinion. 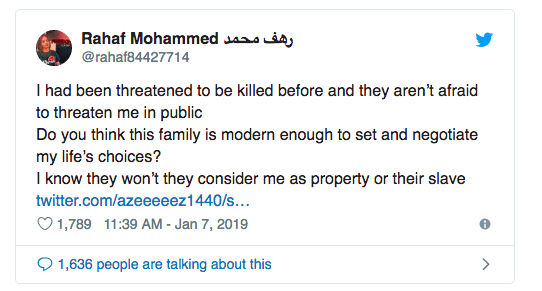 The UNHCR states that women are a clear example of a social group “defined by innate and immutable characteristics, and who are frequently treated differently than men”.

However, the worldwide prevalence of family and domestic violence, coupled with concerns about “opening the floodgates” to women seeking asylum, have seen this approach to gender-based refugee claims rejected on a regular basis.

What about in Australia?

The universal definition of a refugee has been incorporated into Australia’s domestic legislation – the Migration Act of 1958. In addition, Australia’s refugee status decision-makers routinely consider the claims of women at risk of family and domestic violence, trafficking, forced marriage and so-called honour killings if returned to their home country.

In the first, the Tribunal held the violence experienced by a Turkish woman, who had been twice hospitalised due to injuries inflicted by her husband, was personal in nature. So, it could not be attributed to one of the five grounds of persecution.

Nevertheless, her claim was upheld on the basis Turkish authorities failed to protect her from such violence. Because of the country’s lack of enforcement of laws protecting women and widespread social attitudes linking domestic violence with family honour, the applicant was considered a member of a particular social group – women.

The second case concerned a refugee claim by a mother of five from Papua New Guinea, who had experienced repeated attacks by her husband and his family members for refusing to accept her husband’s infidelity. The Tribunal rejected the proposition women from Papua New Guinea constituted a particular social group, due to their diverse ages, backgrounds, religions and economic circumstances.

In some countries, such as Ireland and South Africa, “sex” or “gender” has been added as a potential ground of persecution in domestic legislation. This removes the need to argue whether women are a particular social group in any given society.

Australia has adopted a complementary protection regime, which offers additional protections to people at risk of such harms as torture or inhumane treatment. Australia also has a specific visa for refugee “women-at-risk”.

Individual refugee status decision-makers have also set out alternative paths for protecting women from family and domestic violence. In a notable New Zealand case, the decision-maker held the risk of domestic violence faced by the applicant was for reasons of her political opinion. They described her decision to leave her husband as an act of “self-emancipation” from the “structures of power and inequality” that had sanctioned the abusive relationship.

Even though the UNHCR has determined al-Qunun is a refugee, her future remains uncertain. Thailand is not a party to the refugee convention and there are doubts as to whether she would receive effective protection there. Resettlement in a country such as Australia is possible, but obtaining the woman-at-risk visa would be at the discretion of the government.

The attention on al-Qunun should at least help ensure her claim for protection gets the consideration it requires. Let’s hope it generates similar support for the countless other women in urgent need of international protection.

This article has been updated in light of the UNHCR finding Rahaf Mohammed al-Qunun to be a refugee.