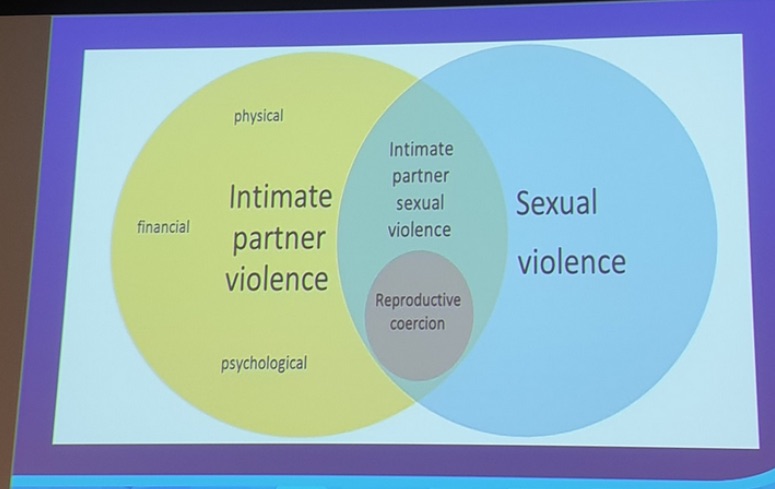 Intimate partner violence and reproductive coercion are common, significantly increase the odds of adverse maternal and perinatal outcomes, and ought to be screened for by all women’s health specialists, a recent summit of Australian and New Zealand obstetricians and gynaecologists was told.

Dr Vijay Roach, president of the Royal Australian and New Zealand College of Obstetricians and Gynaecologists (RANZCOG), has identified domestic and family violence, and mental health as two key issues for the College as it steps up its advocacy on the social determinants of women’s wellbeing.

As well as laying out the scope of domestic and family violence, and demonstrating its links to a host of adverse outcomes including sexually transmitted infections, unwanted pregnancy, preterm delivery, low birthweight and foetal or neonatal death, speakers made the case for obstetric and gynaecological doctors to walk with their patients as ‘safety allies’, and having strategies for women experiencing and at risk of violence and abuse.

Dr Richelle Douglas, medical director of Sexual Health Quarters (the trading name for the Family Planning Association of Western Australia), took out one of two best free communication prizes at the ASM for her impassioned presentation of a federally-funded screening pilot for intimate partner violence, the “astounding” findings of which she shared with delegates.

Douglas presented preliminary results from the study, which has not yet been published, showing that a staggering 1 in 6 participants had been subject to IPV and/or reproductive coercion, with 1 in 16 experiencing the latter alone and 1 in 7 the former.

Douglas found that 16 percent of people reported experiencing violence in their current relationship, and the same proportion (17%) accepted same-day appointments with a counsellor. One percent wanted same-day referral to a refuge.

These people were at 2.5 times greater risk of having a current unwanted pregnancy and 1.5 times more at risk of having a negative sexual health outcome, according to her study, which was funded by a grant from the Department of Prime Minister and Cabinet.

In an interview with Croakey after her presentation, Douglas said:

[There is] a very, very traumatic intersection between reproductive coercion and healthcare.

We know that two women a week are murdered by an intimate partner, we know that one in three women is exposed to physical violence from the age of 15, and one in five women has experienced sexual violence.

We have also seen in Australian data that intimate partner violence and reproductive coercion are a more significant risk factor than anything else for healthcare in women of reproductive age, and I think that it’s something that – as practitioners – we don’t always want to ask about because we feel like it’s opening a can of worms.”

For obstetric doctors, the imperative was clear, with demonstrated links to outcomes including preterm birth, low birth weight, admission to NICU, growth restriction, pre-eclampsia, labour and obstetric complications including caesarean section, and foetal and neonatal death.

This data was presented in a poster by University of Melbourne medical student Anita Stubbs. It also showed women who experienced IPV were more likely to suffer depression, anxiety, sleep disturbances, suicidal ideation and PTSD. Stubbs reviewed 32 studies on the topic dating back to 2002.

“Obstetricians and midwives need to be able to recognise and respond to women who have experienced intimate partner violence and abuse, and be aware of the potential medical complications that can arise as a result of the abuse,” Stubbs concluded.

This was the focus of a separate talk by Professor Kelsey Hegarty, director of the Centre of Research Excellence to Promote Safer Families, who – in keeping with the meeting’s theme (Stop. Start. Continue) – urged colleagues to stop ignoring the issue, start asking women about it and continue responding to their needs.

Hegarty said what women wanted was simple: someone to listen, and a team to support them.

Contrary to the received wisdom that people experiencing violence and abuse in their relationship were reluctant to talk about it, Hegarty said it was overwhelmingly the case that women were relieved to be asked about it, to have their story heard, and to be validated.

She had some important advice for health care workers, including the WHO’s LIVES framework for responding to intimate partner violence (Listen, Inquire about needs and concerns, Validate, Enhance safety, Support), and key screening questions under the acronym ACTS:

It was also essential to screen for immediate risk by asking if a person would feel safe when they left the consult, if they had any immediate concerns about the safety of children or other family members, and whether they would engage with a trusted person if they felt unsafe, she said. 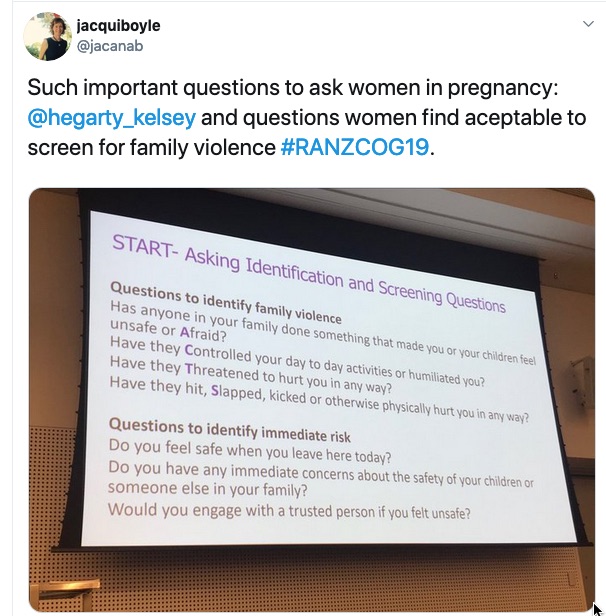 Hegarty took colleagues through safety planning for anyone they identified as being at risk, which involved compiling a list of emergency numbers, helping to identify a safe place and a way to get there as well as family and friends who could provide support, and ensuring cash was available along with a safe place to store valuables and important documents.

She also explored barriers for healthcare workers in engaging with the issue, and strategies to address these using a stages of change model.

Hegarty closed with some key questions for healthcare workers to reflect upon in their own clinical practice. 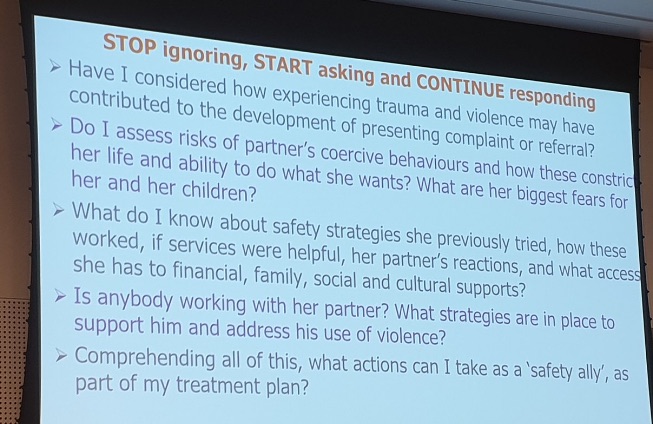 For doctors, Douglas said the issue was often that questions about IPV were perceived as “intrusive”, and they were unsure what to do if someone disclosed that they had or were experiencing it.

In her own study, almost all the involved clinicians felt initially that such topics were not desirable to delve into.

However, after three months of using the pilot screening tool, Douglas said every single doctor felt “it had been really important to ask, and that it had significantly affected how they managed women and improved the outcomes of the women they had seen who had identified as being victims”.

One of the important things to recognise is that as a clinician we’re not there to solve the problem.

We’re there to empower a woman to recognise that what’s happening to her isn’t right and she has the power, she’s a survivor, she can make a difference and actually improve her own outcome and that of her children.”

While screening for IPV did occur in most women’s health settings, Douglas said the issue was how it was being done, with the questions asked opportunistically, in public areas and in even in front of partners.

Douglas called for RANZCOG to recognise IPV and reproductive coercion as significant risk factors for women’s health, particularly antenatally, with rates of violence known to increase dramatically during pregnancy, a “really vulnerable time for a woman and her unborn baby”.

“I guess the message for clinicians is that it’s easy, that you’ve got the skills to do it. We’re used to asking hard questions, but we need to know what to do with the answers as well. And often it’s just empowering women to be able to make their own decisions.”

Watch our interview with Richelle Douglas