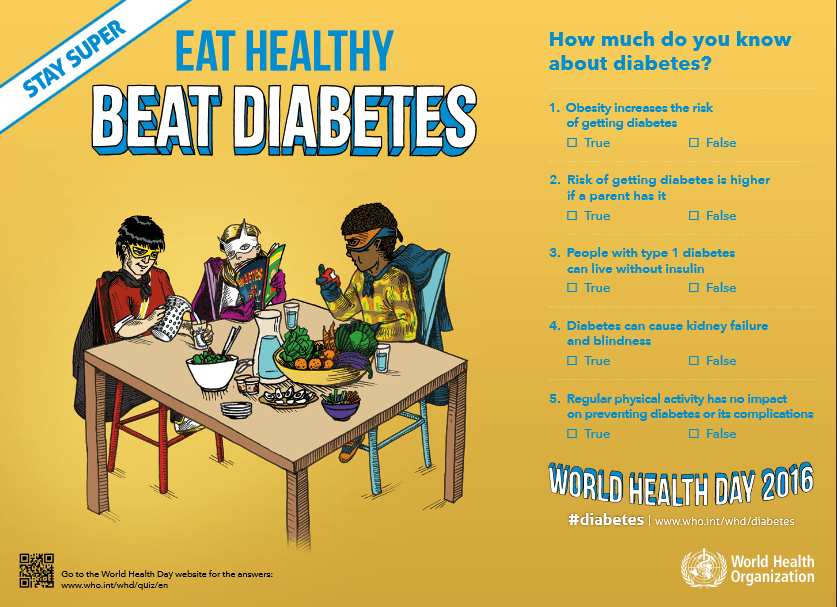 The recent United Nations proclamation of the UN Decade of Action on Nutrition must galvanise the Australian Government into action, says ARC Discovery Indigenous Research Fellow Dr Mark Lock in this timely post. He is calling for a national nutrition summit within six months, to begin addressing systemic failure by the government on the issue.

Today is World Health Day, which is this year focused on diabetes. This week is also #publichealthweek on Twitter (and in real life in the United States – read US President Barack Obama’s proclamation). The Public Health Association of Australia (PHAA) is leading a range of public health discussions all week: today looking at food and nutrition. Read its media release calling on the Federal Government to introduce a sugar tax on soft drink, reduce the marketing of junk food and alcohol to children and adults, and put a comprehensive prevention focus on chronic disease.

It will be easy, as Tim Senior reminds us in this tweet, for governments to focus on individual agency and action and avoid the systemic drivers.

On 1 April 2016, the United Nations General Assembly agreed a resolution proclaiming the UN Decade of Action on Nutrition from 2016 to 2025.

“The resolution aims to trigger intensified action to end hunger and eradicate malnutrition worldwide, and ensure universal access to healthier and more sustainable diets – for all people, whoever they are and wherever they live.”

This resolution serves as a call for the Australian government to step-up and fast-track the development of Australia’s national nutrition policy.

There are numerous issues in Australia to address – such as food security for vulnerable groups, the cost of food in rural and remote areas, the increasing burden of disease attributable to diet, and increasing rates of obesity and type 2 diabetes. For Australia’s Aboriginal and Torres Strait Islander peoples, “diet is the single most important factor in the chronic disease epidemic facing Aboriginal communities.” The resolution commits governments “to reverse the rising trends in overweight and obesity and reduce the burden of diet-related noncommunicable diseases in all age groups.”

However, the resolution serves to highlight the systematic failure of the Australian Government to be proactive in the development of a national nutrition policy, the development of an associated framework, and the allocation of resources. This can be addressed with fast-track investments to do the work required and to therefore meet the UN resolution which “calls on governments to set national nutrition targets for 2025 and milestones based on internationally agreed indicators.”

Australia’s world class health system can positively respond to the UN Decade of Action on Nutrition 2016-2025 by convening a national nutrition summit within six months to lay-out a plan of action to achieve a better nutrition future for Australia’s citizens.

Dr Mark J Lock is an ARC Discovery Indigenous Research Fellow at the School of Medicine and Public Health, University of Newcastle.