The World Medical Association is urging governments to commit to an ambitious and binding climate agreement to protect public health, after last week’s COP20 negotiations in Lima, Peru concluded with limited progress toward a deal in 2015. See the full statement below, which commits to “ensuring that the medical community is actively engaged in advocacy and action to mitigate climate change”.

The call came as Australia was rated the worst performing industrial nation in the latest Climate Change Performance Index, published by GermanWatch and the Climate Action Network Europe, which said:

“The new conservative Australian government has apparently made good on last year’s announcement and reversed the climate policies previously in effect. As aresult, the country lost a further 21 positions in the policy
evaluation compared to last year, thus replacing Canadaas the worst performing industrial country.” 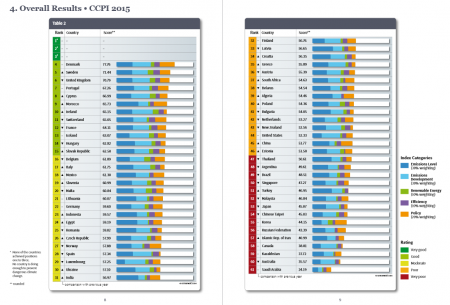 In the wake of the recent G20 meeting in Brisbane, where Australia was regarded as having to be dragged kicking and screaming to discuss climate change, British Prime Minister David Cameron this week said he was sure Australia will respond to international pressure and do more on climate change because it will not want to be seen as the “back marker”. The Federal Government denied international pressure was behind its decision (which Greens Leader Christine Milne described as “begrudging”) to commit $200 million to the Green Climate Fund.

One of the organisers, Jacqui Remond, Director of Catholic Earthcare Australia, said:

“Climate change isn’t just an environmental issue – it’s a matter of justice. It’s about people in poverty, particularly indigenous populations, who are being hit first and hardest for what they’ve contributed to least. It’s also about Australians who are preparing to face more intense and frequent bushfires as we approach what could be the hottest summer on record.”

Common Grace says that if the Prime Minister turns down their offer of a rooftop solar system, the panels will instead be installed at the Davidson Brigade of the Rural Fire Service, where he serves as a volunteer.

Statement from the World Medical Association

Dr. Mukesh Haikerwal, Chair of the WMA Council, said: ‘Climate change is one of the greatest threats to human health. The WMA strongly believes that the health sector must be fully integrated in current global debate and action on climate change.’

‘As negotiators look toward Paris, it is imperative that governments commit to addressing the devastating health implications of unmitigated climate change,’ said Dr. Haikerwal. The inclusion of “health and sustainable development co-benefits” of addressing climate change in Article 19 of the draft Lima call for climate action represents an important first step – but stronger leadership and commitments by governments are urgently needed to facilitate a robust and binding agreement at COP21 next year.

As climate change negotiations continue, the WMA is committed to ensuring that the medical community is actively engaged in advocacy and action to mitigate climate change.