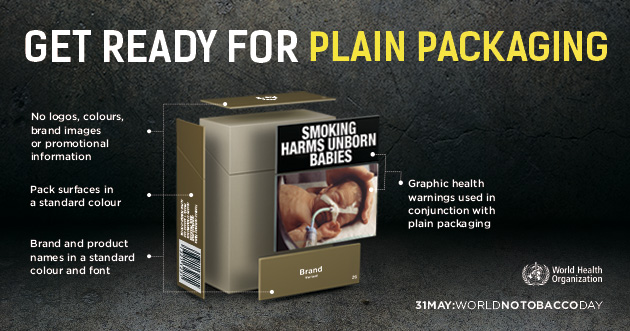 Image from WHO World No Tobacco Day campaign

World No Tobacco Day 2016 – building on our success

On World No Tobacco Day 2016, VicHealth CEO, Jerril Rechter urges us to reflect on the progress Australia has made in reducing the harms associated with tobacco use. She discusses the role of plain packaging regulations in reducing the appeal of smoking, in particular to young people.

She also identifies some key groups for whom strategies such as these have not been as successful and recommends that they be a key target for future anti-tobacco efforts.

We’ve all seen the graphic images on cigarette packets with the tobacco company branding removed. They’re confronting, emotive and no longer appealing.

Today, on World No Tobacco Day, it is important to look back at the victories we have had on smoking cessation.

The introduction of plain-packaging in 2012 was a major milestone in the fight by Australia’s public health community and governments on Big Tobacco; we are the first country in the world to do so.

Almost four years on and we can definitively say that plain packaging is beginning to tackle our national smoking problem.

We have one of the lowest smoking rates in the world and are on the path to creating a healthier and smoke-free generation.

Since 2012, there has been a measured reduction in tobacco consumption, and the British Medical Journal’s 2015 evaluation showed we have plain packaging to thank for that.

The policy has accomplished what it set out to do and reduced appeal to consumers, particularly to adolescents and young adults. It’s also sent harsh reminders to smokers about the health risks associated with smoking, and encouraged some to quit.

This is something Australia can be very proud of.

But in terms of future public health measures to reduce tobacco consumption, we need to move forward and look at other innovative ways to eliminate the harms from tobacco.

Tobacco products are responsible for the deaths of 4,000 Victorians every single year.

In fact, research from the Australian Institute of Health and Welfare’s Burden of Disease Study 2011 shows tobacco is responsible for 9 per cent of the total burden of disease and injury, making it the most burdensome risk factor.

In order to be able to move forward, we need to look back at areas where we have not been so successful.

One of these areas is the huge gap in smoking prevalence between our most advantaged and disadvantaged communities. People 14 years or older living in areas with the lowest socioeconomic status (SES) are three times more likely to smoke daily than people with the highest SES.

Smoking is a chronic relapsing addiction, and we need to show compassion and support to those vulnerable groups unable to quit. This is particularly important now with growing tax increases that will see a packet of cigarettes costing about $40 a pack in 2020.

Tobacco tax increases must be accompanied by increased resources to support smokers to quit, such as targeted support for the most disadvantaged smokers, including Indigenous people and those suffering from mental illness.

We need to continue universal approaches but we also need targeted ones. Tackling the issues that lead people in disadvantaged areas to smoke is crucial to supporting better health outcomes for these communities.

We also need to work harder to protect people from passive smoking.  Non-smokers deserve the right to breathe in clean, smoke-free air. The Victorian Government’s commitment to ban smoking in outdoor dining areas from next year is a welcome one.

But key to these additional measures will be education and enforcement.

Walking into one of these Victorian Government buildings recently, I was hit with a cloud of smoke from a number of smokers puffing away outside the entrance. It was horrible. This just goes to show that people still need reminding about smoke-free areas.

Tackling smoking harm isn’t the responsibility of just one person, organisation or government. We all have a role to play in this.

World No Tobacco Day is a reminder for us all that it’s time for tobacco control to be everyone’s business. Our race to eliminate the harm from tobacco will need the expertise and passion of a wide range of public health professionals, researchers and policy makers and we need support and commitment from all levels of government.

Our history in tobacco control has been incredibly encouraging. Let’s continue our ground-breaking record.

Jerril Rechter is the CEO of VicHealth

World No Tobacco Day is a key global public health campaign of the World Health Organization (WHO). The annual event held on 31 May each year aims to draw attention to the dangers of tobacco and explore effective policy opportunities to address the harm caused by tobacco.