Home Healthcare and health reform diabetes #WorldObesityDay – communities are ready for change, time for govt to step up 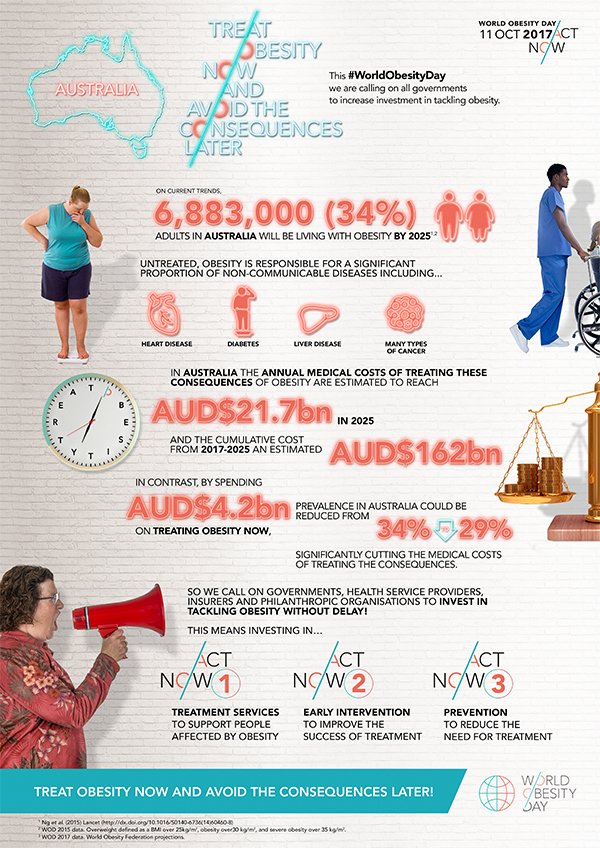 #WorldObesityDay – communities are ready for change, time for govt to step up

In the post below, Anna Peeters, Professor of Epidemiology & Equity in Public Health and Associate Director of Deakin University’s Global Obesity Centre, writes that many communities across Australia are showing the leadership and momentum we need from the Federal Government to make obesity prevention a national priority. She says it should  introduce measures endorsed by a host of leading public health, medical and academic organisations, including a 20 per cent ‘sugar tax’ and increased restrictions on junk food marketing.

See also this statement from Cancer Council Queensland calling on workplaces to help reduce the burden of obesity, through simple changes like adding healthy options into vending machines, encouraging standing meetings or walks around the block, or providing healthy catering options.

Today is World Obesity Day. Around the globe the medical and public health community is calling on governments, organisations and citizens to take action now on obesity to avoid the consequences that we know will follow.

In Australia, if current trends continue, there will be approximately 1.75 million deaths in people over the age of 20 years caused by diseases linked to overweight and obesity, such as type 2 diabetes, cancer and heart disease, between 2011 and 2050.

And the estimated direct medical costs of obesity are predicted to reach $22 billion in 2025 alone.

The World Health Organization has set a target to get obesity back to 2010 levels, as a first step, by 2025.

But time is ticking – we now have less than eight years to achieve this.

It can be done, and we do know what to do, but we need urgent action now if we are to get there.

Across Australia, communities are demonstrating that they are ready for this action.

Recent examples include Bendigo Health’s decision this week to remove sales of all sugary drinks from its hospital.

And last month, the City of Greater Geelong voted to go sugar sweetened beverage-free. Under this council plan, soft drinks will be withdrawn from sale at all council and community operated facilities, such as sports venues, by the end of 2019.

At the Global Obesity Centre, we evaluated a similar strategy put in place by YMCA Victoria in 2015.

We found that both the YMCA and its customers were happy with changes to remove sugary drinks from display at the point of sale.

Of the customers surveyed, 84 per cent believed the policy would lower community consumption of soft drink and 89 per cent supported the policy.

Through our work we are hearing are hearing more and more people say that policies like this “just make sense”.

There is growing community momentum to ensure environments like hospitals, schools and recreation centres support us (and especially our children) to make healthier choices.

In the absence of strong government leadership on tackling key contributors to obesity rates, like soft drink consumption, we have seen a spread of community organisations and local governments take their own steps.

Across Victoria alone, more than 50 community food service outlets now have a policy to remove or reduce availability of sugary drinks, most taking this stand in the past few years.

While all communities are different, many are coming to the same conclusions about the need to change our food environments to support their communities to limit unhealthy food and drink.

In Western Victoria, a clear understanding of the complex drivers of obesity and the role of health services and retail in the provision of sugar sweetened beverages, led to a removal of sugary drinks at the Western District Health service. And this was supported by the same changes in the other health services in the region.

In the middle of this year, the NSW government announced the removal of all sugar sweetened beverages from hospitals. This state-wide policy also aims to improve the healthiness of foods available across all health facilities, with similar guidelines seen in many other Australian states.

Policies like this capture the current mood of the community, who are ready for strong state-wide and national leadership on obesity prevention.

We need these policies to spread to other key settings where our children’s food preferences are modelled and set too, such as train stations, sporting grounds and clubs, and public spaces like our national parks.

But to truly transform our food environments so that they rebalance in favour of healthier food and drink –  making the healthier choices the easiest choices for everyone – we need the Federal Government to step up to the plate.

We need our political leaders to take a stand on obesity with a robust national policy that builds on evidence-based measures to tackle what is becoming one of our country’s greatest health crises.

Without this, our goal of curtailing obesity rates to 2010 levels will never be met.

The recent release of the Tipping the Scales report, which called for government to enact a national strategy on obesity prevention, was endorsed by more than 35 leading public health, medical and academic organisations.

It outlined a number of evidence-based policies – including a 20 per cent tax on sugar sweetened beverages and increased restrictions on junk food marketing – to be enacted nationally as a matter of urgency.

We know these steps can help transform Australia’s food environments for the better, and we know that most in the community support their introduction.

So it’s time the Federal Government made obesity prevention a national priority.