Home Croakey Conference News Service #ACEM19 “Your children are stepping up. Will you?” – student’s call to action opens #ACEM19 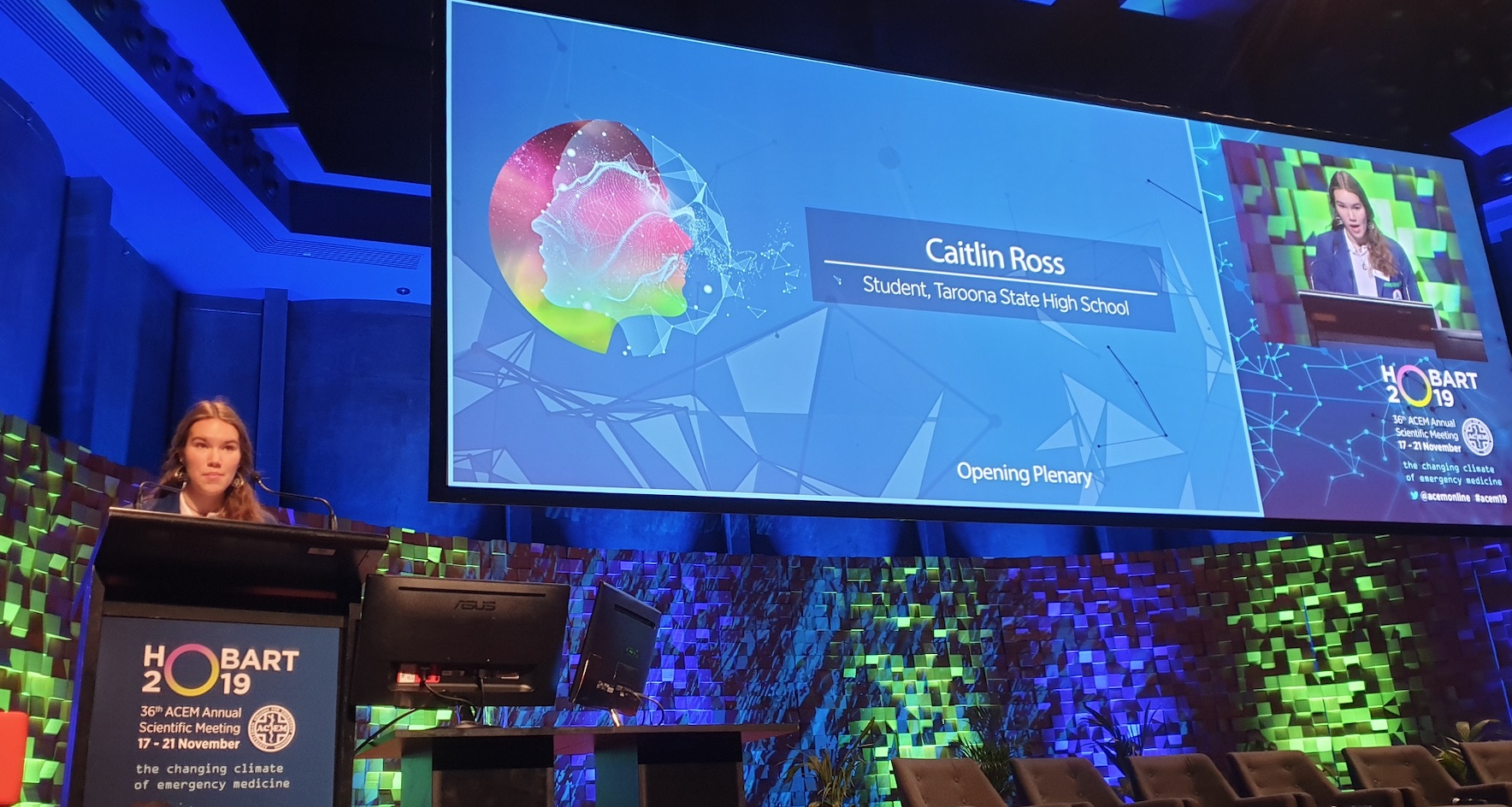 #ACEM19 privileges the youth voice on the climate crisis. Photograph by Amy Coopes

“Your children are stepping up. Will you?” – student’s call to action opens #ACEM19

Sixteen-year-old Caitlin Ross presented a stirring call to climate action in a presentation to the opening plenary of the Australasian College for Emergency Medicine 36th Annual Scientific Meeting in nipaluna/Hobart this morning.

Ross is in year ten at Taroona High School, and involved in the Hobart Student Climate Action Network; together with other students, she helped organise and MC the last three Hobart School Strikes for Climate Action. Her speech follows below.

The theme of #ACEM19 is “the changing climate of emergency medicine”. Follow @coopesdetat and @acemonline for live tweeting.

It makes me so happy that the theme of the conference is to do with climate change and that this group of people understands how important this issue is and are joining the conversation around climate action.

To give you a bit of background of how I got involved in the climate movement I want to talk about the school strikes, why we are striking and most importantly why you need to care.

You may have heard about the recent school strikes for climate action. They were started by a Swedish school girl Greta Thunberg when she sat every Friday outside Swedish parliament to demand climate action.

Her one person strikes have now grown into a massive movement around the world and she has spoken at the United Nations: Climate Action Summit, the COP24 Summit, the US Congress and The World Economic Forum just to name a few.

In November last year, the first Australia wide school strike was held. 50,000 people were involved. In Hobart we had a bit under 1,000 people attend our rally. In May of this year the second global school strike for climate was held.

This time we had more publicity and in Australia we had demands, no new fossil fuel works including the Adani coal mine, 100% renewables by 2030 and fund a just transition and job creation for all fossil-fuel workers and communities. There were 2,000 strikes around the world and 1.4 million people were involved and 8,000 in people in Hobart.

This September four million people worldwide attended these now student-led general strikes. In little old Hobart we had between 15,000 and 22,000 people attend, probably making it the biggest rally Tasmania has ever seen. So, there is a short background on the strikes.

Whenever I bring up the school strikes, I am always asked why. Why do you strike? Will it make a difference?

Why not leave it up to the politicians? That’s what we elected them for.

But the simple truth is that our politicians aren’t doing anywhere near enough. The science is clear, the research has been done and now we just need everyone especially our leaders to listen.

If we don’t act soon, we are headed for the biggest crisis we have ever faced. And I don’t want to be rude here but most of you won’t be around for that, neither will most of our politicians.

But I will. It will be my generation and those that come after us that will see the huge changes, the massive storms and natural disasters and the deaths of millions of species, and if we don’t act at all, the collapse of our society. It’s my generation that will have to bear the consequences.

To answer the question of why we strike I would like to ask you guys a question. Could you raise your hand if you have a child under eight, or if you have a niece or nephew or grandchild or child you know under eight.

By the time those children can vote, the fate of the human race and our planet will have been decided. We will either have done enough or we won’t.

And their generation, who will be the most affected, will have had no say on the outcome. So, tell me again that our government speaks for all of us.

They keep saying that school is no time for action but when I weigh up my future and an English lesson, the scales tip heavily one way.

Terrified by the inaction

I’ve given up trying to explain how much it scares me that our politicians aren’t doing anything. I’ve given up finding the words to say how frightened I am that we might not fix the climate. I have no words left to express how much our inaction terrifies me.

We may not have much time, but we do have the ability to change. Already we are seeing the general public becoming more aware of the issue of climate change and the mindset starting to change.

Last year the IPCC (the Intergovernmental Panel on Climate Change) stated that to stay below 1.5 degrees of warming we will need to cut our emissions by over 45 percent by 2030 and cut them to net zero by 2050.

At this point you might think that we would need to quote Arthur Dent from Hitch Hikers Guide to the Galaxy, “so this is it we are all going to die” but we can change and in fact we have to change.

It has got to the point where we do not have any other choice but to mend our ways. This is not something we can put off till later.

Your generation is the one that holds the power. What you do, say and stand for will impact my generation and your children.

That child you thought of earlier, their future will be directly impacted by what you do today.

If you choose not to act, to put your convenience above someone else’s future, to stay silent, not to make your voice heard on this issue then I sincerely hope that when you go home you will at least work out how to apologise to that child.

When talking about climate change, people keep saying they don’t want their children, grandchildren and descendants to suffer the effects. But it is no longer that far away. We are the children you talk about.

It’s very easy to become discouraged when you hear all of this. But there are amazing things being done.

Climate change is the biggest crisis humanity has ever faced but it also gives us the opportunity to come together as a species, change and improve.

The people alive at the moment are the first to know about climate change and we are also the last that can do something about it. We are the smartest species to ever walk this earth.

We have made more changes to our home than any other animal but this knowledge comes with a responsibility to look after and protect this earth.

We have a duty to be ready and to fix what we started and for you guys who call yourselves emergency specialists, pride yourselves on training and preparing for all sorts of situations, I truly hope you are ready for this.

Your children are stepping up. Will you? 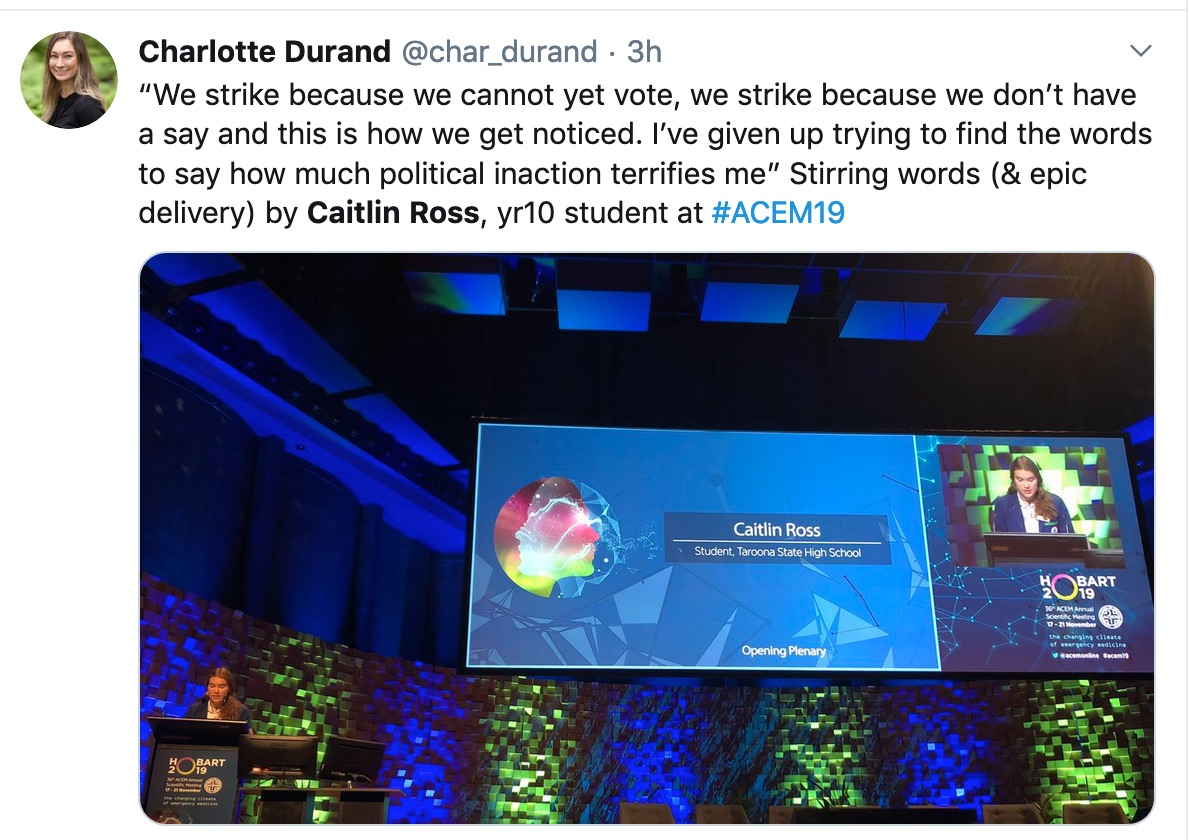 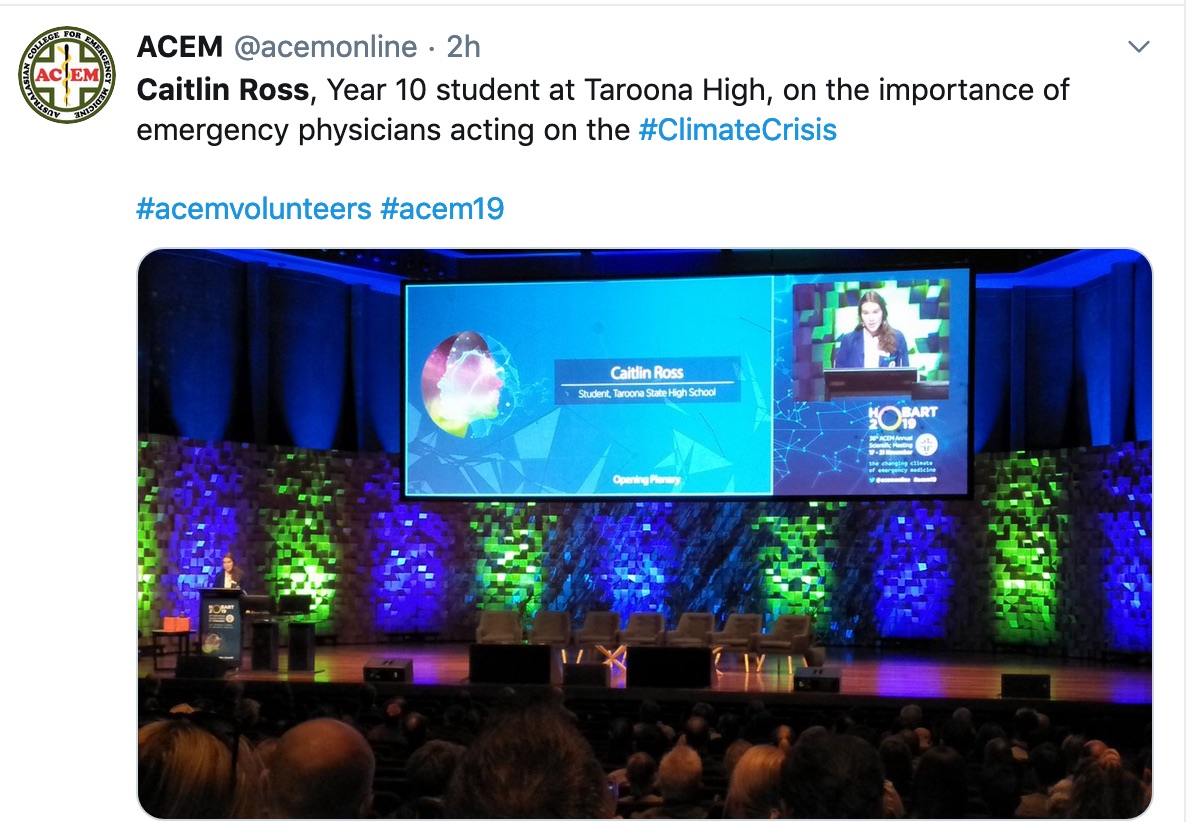 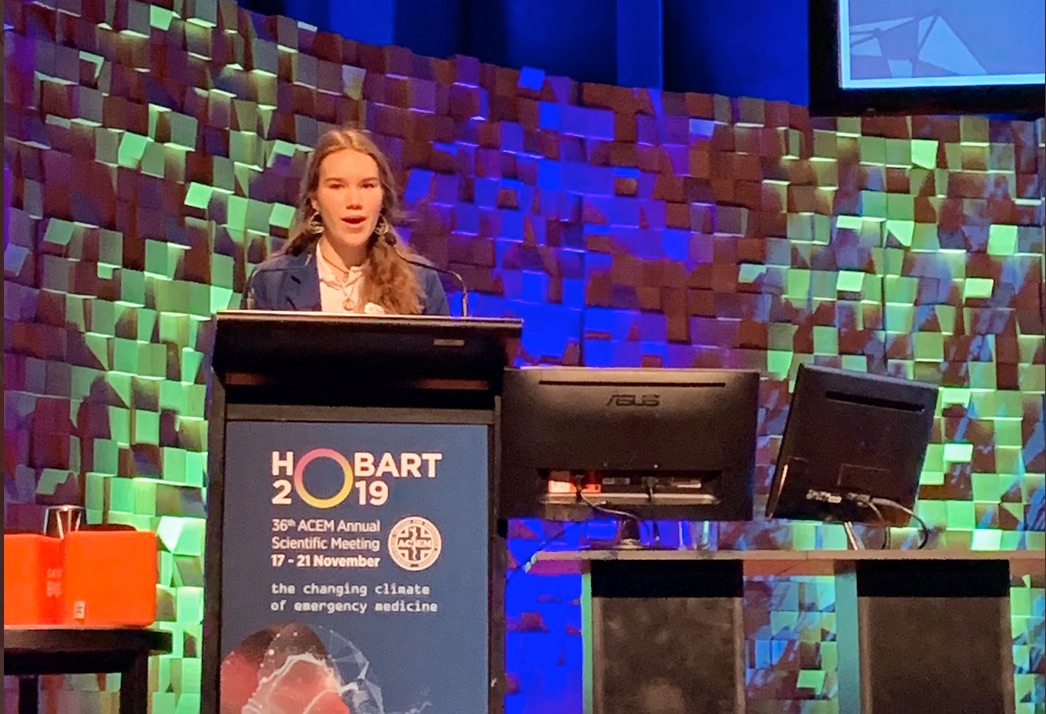 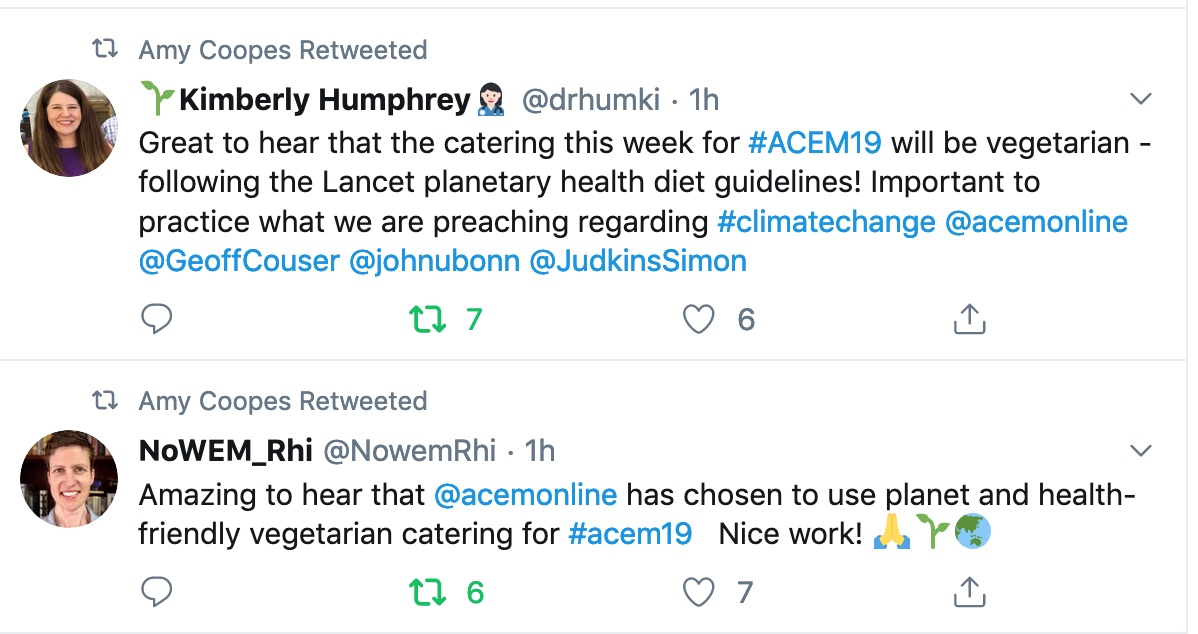 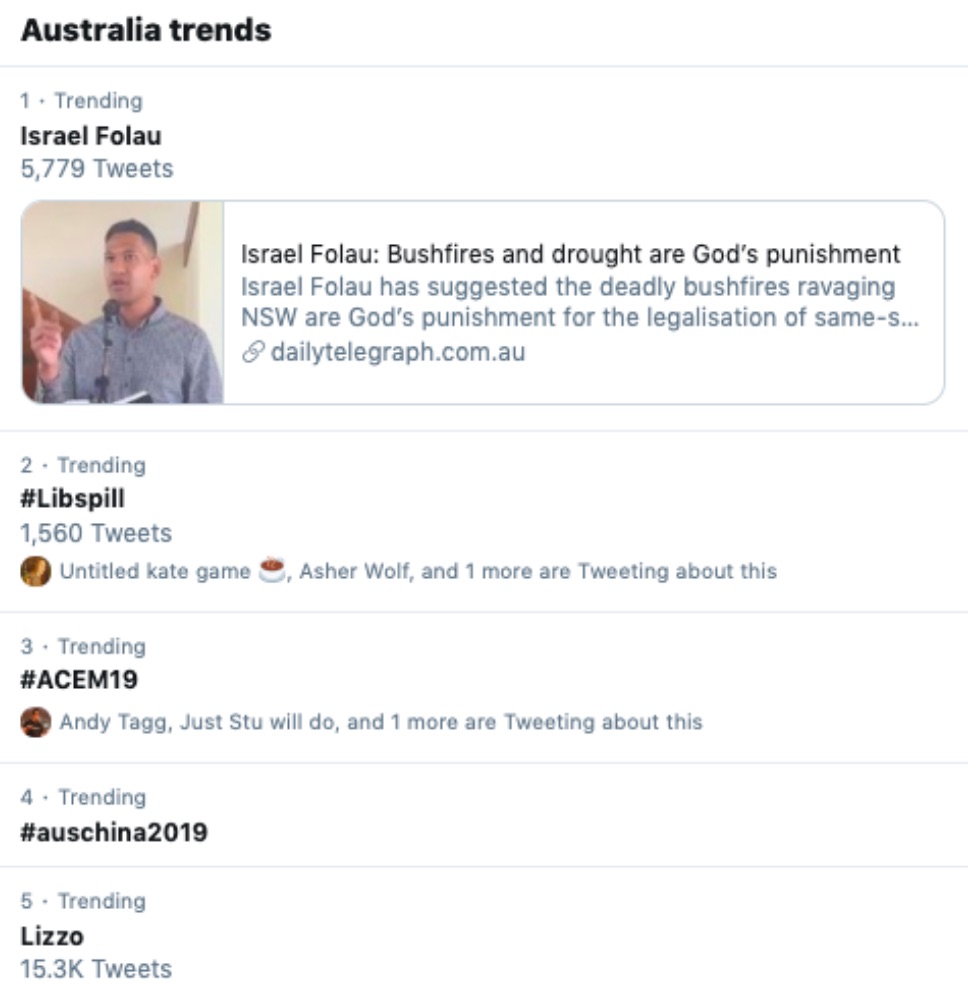 The 2019 ACEM ASM is being held in Hobart from November 17-21. Amy Coopes is there for the Croakey Conference News Service. Follow @coopesdetat, @acemonline and #ACEM19 for all the latest.