Home Healthcare and health reform co-payments Joining the dots: how universal healthcare is being undermined 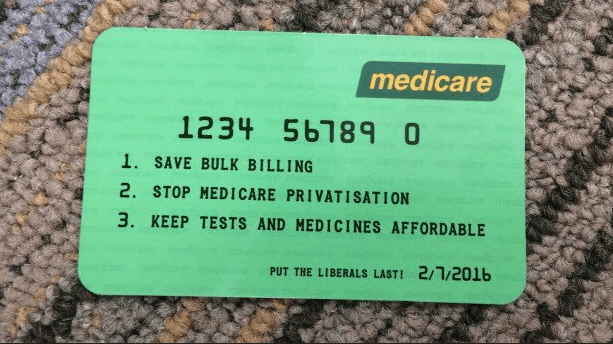 From the #SaveMedicare campaign during the July 2016 federal election

Joining the dots: how universal healthcare is being undermined

In the previous article at Croakey, Associate Professor Peter Sainsbury argued the case to end public subsidies of the private health insurance industry.

In the article below, Doctors Reform Society president Dr Tim Woodruff contrasts the level of Federal Government support for the private health insurance industry with that available for general practice, as evidenced by the Medicare rebate freeze.

He argues that Federal health policy is being driven by an ideological commitment to private health insurance, rather than a concern for equity and efficiency.

The Medicare rebate freeze is here to stay. Despite the Federal Government announcing it had heard the electorate expressing their concerns about Medicare at the election, the Prime Minister is ploughing on, claiming that savings must be made, that people should pay a co-payment if they can, and anyway the bulk billing rate is going up so patients aren’t missing out.

Do savings need to be made?

Even if we decide to improve the deficit, it can be done with either increased revenue or decreased spending. There is ample scope for both approaches but the decisions do not amount to need, they are political, practical, and ideological.

Reducing government health care costs is not necessary but it is sensible to spend more efficiently and to save on unnecessary or ineffective care.

They constitute just 5 percent of Government health funding. In 2005 the figure was 5.6 percent. It has fallen. The main drivers of government health care costs do not include general practice.

Other options for savings

The taxpayer funded private health insurance rebate has increased by 63 percent in that same period.

If the Government is really concerned about savings in the health care system, it could start by paying world market prices for pharmaceuticals and saving $1 billion per year, freezing and gradually abolishing the private health insurance rebate ($8 billion per year), addressing private and public hospital inefficiencies ($1 billion per year), and other savings as outlined by the Australian Health Care Reform Alliance.

The claim that the Medicare rebate freeze is about saving is deceptive and dishonest.

The second justification for the freeze is that those who can afford a co-payment should do so. This argument centres on moral hazard (the danger that if a service is free at the point of delivery it promotes overuse).

The problem is that the Federal Government itself does not believe it. Thus, it happily supported a trial by Medibank Private to have their members not pay the co-payment when they visited GPs. The Government also supports No Gap private health insurance policies that remove co-payments.

The third justification (post hoc) is that the bulk billing rate has risen to an all time high of 83.7 percent in the July 2016 quarter, despite the freeze being in place for two years. The Federal Government refuses to reveal precisely what items the figure covers (standard GP visits, health checks, medication reviews, case conferencing, etc). Thus, if there has been an increase in use of items that have usually been bulk billed anyway, the figure may be misleading.

Even if it is accurate, other factors may be pushing the rate up. Since 2005, there has been a 26 percent increase in the number of GPs per 100,000 people (full service equivalent).

Competition helps to control prices as the Federal Government would readily acknowledge and encourage. It doesn’t necessarily help quality.

Most GPs aim to provide a first class service but time and financial pressures are a reality. The rebate freeze will result in a five percent decrease in Medicare income for GPs unless they see more patients.

GP practices which have onsite pathology can be getting thousands of dollars rent to supplement their income, thereby enabling them to limit patient co-payments, although the Federal Government plans to reduce that, thereby putting more pressure on GP income.

If GPs do not accept a pay cut forced on them by Government ideology, the response to that can be new co-payments for previously bulk billed patients, higher co-payments for those already paying, reduced access to patients who are poor, and/or faster lower quality services. All of these options will make patients suffer.

GP co-payments to patients have increased to $35 in June 2016, a 65 percent hike in the last decade. Patients vote with their feet when faced with increased costs. They may simply not attend the GP.

The Australian Bureau of Statistics survey indicates that five percent do not see a GP because of costs. They risk becoming sicker by not seeking care when they need it. This may ultimately cost them and the taxpayer more. They may attend a hospital Emergency Department, or go to a corporate bulk billing clinic if available.

But continuity of care is central to the management of many chronic illnesses, and is less likely to occur in corporate vertically integrated bulk billing medical centres or Emergency Departments.

Primary health care is accepted around the world as the most efficient and effective part of the health system if supported properly. The Government refuses to accept evidence.

Late on Friday 5th November, the Health Minister’s department issued details of policy regarding the Health Care Homes initiative. No politician or senior public servant releases details of policy at such a time unless the hope is that it will not be noticed, lost in the 24-hour weekend news cycle.

It indicated that patients who enrolled for chronic disease management care would have to pay full price if they developed another problem, such as a leg ulcer that required more than 5 visits a year. The policy was rescinded as a mistake within days.

But it indicates that the Minister for Health or her department continues to have a cost cutting agenda without understanding the health system they are administering and without a care for patients.

The bulk billing rate has fallen in the quarter to September 2016. It may indicate that the desired effect of the Medicare rebate freeze is finally occurring, or it may be a simple fluctuation in the figures.

Anecdotal reports of practices abandoning bulk billing and charging pensioners and health care cardholders $30 are widespread. Co-payments, however, just keep on rising, another $1.50 this quarter, following the 65 percent hike over the last decade, way above inflation.

In 2009, the then Opposition Leader, Malcolm Turnbull stated on ABC radio (on PM, 15 May):

That has always been the agenda of the Coalition. It has pursued it relentlessly, sometimes rashly, often insidiously, pretending the agenda is otherwise.

The challenge for the Government is to do it without scaring the vast majority of Australians who want Medicare to remain and be improved. That is all Mr Turnbull has learned from the Federal Election result.

• Dr Tim Woodruff is president of the Doctors Reform Society. The DRS is an organisation of doctors and medical students promoting measures to improve health for all, in a socially just and equitable way. The society was formed in 1973 to support a proposal for a publicly-funded universal health insurance system.  Medibank (now Medicare) was successfully created despite opposition from the Australian Medical Association. It is not affiliated to any political party, receives no corporate funding, and relies financially on subscriptions and donations. Its website says the DRS “will speak out against any political party, organisation or individual that threatens public health care”.